Trevecca has always been a place where people fall in love. We caught up with a few couples who told us their stories of dating through the decades.
1960’s
Dr. Leroy Pepper, associate professor of history and political science and class of 1970, begins to tell his love story in his office on the second floor of Tidwell, and suddenly he is taken back to the summer of 1969 at a campground in north Florida. He and his wife Martha had already met at Trevecca, but they were both in serious relationships through school. That summer, though, they reconnected, and both of them were single.
In the fall, Leroy went back to school as a senior, and Martha went back home after graduating. They dated long distance for a year, visiting each other during breaks and sending each other letters.
Pepper recalls that at the time, dating at Trevecca meant little privacy. When he took a young lady on a date, she had to sign out with her resident assistant and tell her where she was going to go. Very few people had cars, and students mostly went to campus events together because they were free.
The two announced their engagement at the Valentine’s Banquet, as was custom for Trevecca at the time. And the rest, as they say, is history. The couple was married in August of 1970, just after Leroy’s graduation.

The year was 1972. Joy Wells, associate professor of sociology and social work, and a few of her girlfriends were gathered in a group in the quad area outside of Georgia Hall. As part of the ceremonial freshman initiation, the ladies had to get down on one knee and propose to the upperclassmen, but here’s the catch: they had to continue asking until the men said ‘yes’. Joy was paired with a young man named Marvin who immediately caught her eye. She asked him several times, and he picked on her each time with a simple “no”. Finally, Marvin said yes.
Later on that semester, Marvin was drafted into the army. While in Fort Knox, he occasionally traveled south to go to campus events. One evening, after a theatre production, Marvin asked Joy if she wanted to go out to dinner. The two went out with another couple to a Shoney’s on Murfreesboro Road. This was the beginning of their relationship. Marvin continued to visit campus as often as he could so he could see Joy. He also gave her his class ring from high school, symbolizing that they were going steady, or dating each other exclusively.
In the summer of 1973, Marvin was assigned to go to Germany. Joy laughs as she recalls that in order to stay in touch, they actually had to send letters back and forth; something most long-distance couples nowadays don’t do. On a rare occasion, Marvin was able to access a phone and call Joy, but it wasn’t often.
In the fall of 1974, Marvin had served his duties and was able to comeback to Trevecca as a student. The couple continued to go on dates, but for the most part they went to on-campus events held by the school in order to save money. Every so often, the two would go play putt-putt or bowl, or to an occasional movie.
Marvin and Joys’ favorite place to go, though, was to a place down on Nolensville Road called Taco Tico.
1980’s
It was the fall of 1979 and Susan Rector is in chemistry class. A young man named John Dunn was the lab assistant for the class. He had already taken a few chemistry classes, so he was perfect for the job. Dunn was kind of a know-it-all, though, so Susan wasn’t always too fond of him.
Fast forward to the spring of 1981-the two had a class together that was focused on fungus. John needed some help with a project one night, so he asked her if she would meet him in the library. That night, Susan said, was the couples’ first date.
“We always laugh because we tell people we met in fungus class,” said Dunn, class of 1982.
Soon after, the couple ended up going with some friends on a double date to a movie theater, followed by dinner. A normal date for the two usually consisted of a trip to the capitol to take a walk, a basketball game on campus, or hanging out with friends. Money was tight, and there wasn’t much to do off campus. Occasionally, the two would go visit each other’s families on weekends.
John graduated before Susan, so he went home to go to medical school, while Susan stayed in Nashville
to finish school, as well as work at St. Thomas Hospital. After about a year and a half of dating long distance, the two were married.
1990’s
It’s a sunny Friday afternoon, and Tom and Jessica Middendorf sit in Tom’s office. Tom is holding his little girl in his arms as she is sleeping. There are family pictures spread all over the room. The couple begin to look back on their dating days at Trevecca.It was the spring of 1995. Jessica was a junior in high school, and Tom was a freshman in college. Jessica was at a youth event, sponsored by Trevecca. Tom happened to have some friends from Trevecca that were going, so he decided to join in.

The two met at the event and stayed in touch after. Two months later, they began to date.

When Jessica got to college, both she and Tom were RA’s. Lobbies were a big date spot for them, since they were on lobby duty often. There was always Papa John’s pizza involved, Jessica said.
“A big date for us was Chili’s. They hated us there because we always got the bottomless chips and salsa with waters, so we’d walkout of their only spending like three bucks,” Tom said,laughing with Jessica.
The couple often went on their Chili’s dates after Vanderbilt football games,since the restaurant was down the street from the stadium.
Occasionally, the two went to a 99 cent movie theater near 100 Oaks mall, where Wal-Mart is now. Jessica remembers that they had to be quiet about it, because it was against the rules during the first two years she was at Trevecca.
On early mornings, Tom would take Jessica out to fish with him at Percy Priest lake. It was the fall of 1998, and the two were sitting on the dock as usual. Jessica frequently got bored and went through Tom’s tackle box, as she did on this particular day. Tom had attached an engagement ring to a fishing bobber in his box. Like always, Jessica began to go through the tackle box when she got bored, but she wasn’t noticing the bobber with the ring on it.
Tom began to get nervous, so he asked her if she could get him a bobber out of the box for him. Jessica finally
saw the ring and Tom proposed right then and there; later that evening there was an engagement party for the two.
2000’s
James and Jane Storie have the internet to thank for their meeting.
James had just finished his sophomore year of college, and Jane was on her way to college. She looked on Craigslist for a particular textbook she needed, and it just so happened to be James who was selling the book.
The two met up to trade the payment for the book and they became friends from that point on.
After Jane’s freshman year, she and James started dating. The two were very involved in school events, so they were together on campus often. Every so often, the couple would take day trips to places like Chattanooga.
The couple went to sporting events on campus often, since they didn’t have much money to go elsewhere.
During baseball season, James and Jane went a couple miles down to see the Nashville Sounds minor league team play baseball because they got good deals on the tickets.
On weekends, the two would spend time with each other’s’ parents,taking weekend trips.
The couple remembers a special event where students would have an opportunity to take a trip down the river on the General Jackson boat. Whenever the boat passed under a particular bridge, the couples would all kiss to have good luck in their relationships; it was a tradition.
James laughs as he remembers trips to Krispy Kreme Donuts. Students would fill up their Station Wagon and ride over to get special deals.
James and his friends would go buy a bunch of roses from a local flower shop and he and his friends would go door to door, selling the flowers to whoever forgot to buy their date a rose. At the end of the day, James was able to go buy a dozen roses for Jane.
2010’s
Spencer Stevens and Hayleigh Staggs sat in Spencer’s apartment, with a third person present, of course, since they 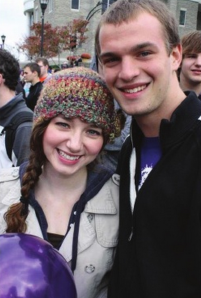 wouldn’t be alone together in the apartment.

The couple began to tell their dating story, nearly finishing each other’s sentences.
It was the fall of 2011 and Staggs went to a college-focused worship service with her leap group called Sanctuary. By chance, Staggs sat next to Spencer and two met then and there.
The next two months were filled with talking and getting to know each other, until Spencer decided to ask Hayleigh out on November 10; the couple’s first date was to the legendary Pancake Pantry in Hillsboro Village.
A typical date looked like this: the couple parked their car in a little lot next to LP Field, and from there they
walked across the pedestrian bridge and through the city to a restaurant called Demos’.
Every so often, Spencer and Hayleigh would see a movie, but money was low so they mostly hung out on campus.
When asked what dating at Trevecca is like, Staggs rolled her eyes.
“There is a huge pressure to marry here,” Staggs said.
The couple said they aren’t in a hurry. For now, they’re enjoying their time at Trevecca.“We’re able to share experiences together,” Stevens said.
This article originally appeared in the April 2014 TrevEchoes.

This entry was posted in TrevEchoes. Bookmark the permalink.