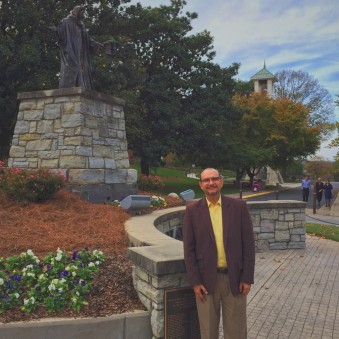 Students who want to make a change in the world must have a sense of urgency and be discontented with the status quo, said Gustavo Crocker, General Superintendent for the Church of the Nazarene.
“We have to be willing to do things that are currently unacceptable to the world, but are acceptable to Jesus,” Crocker said. “We need to be able to ask ourselves, ‘What is not right?’ At times we will have to speak for the voiceless—that’s not popular. At times we will have to challenge the status quo—that’s not popular, but Jesus will honor that.”
Crocker on Thursday, October 29 spoke to Trevecca students in chapel during his second official visit to the campus as General Superintendent, a role he was elected to in July 2013.
The Church of the Nazarene has six global leaders called General Superintendents, who represent the denomination. Crocker represents the Eurasia Region, as well as the Southeast Region of the United States.
In his sermon, Crocker used Scripture from Mark 2:1-12: the story of the paralyzed man who was brought down through the roof of a home, in order to be healed by Jesus. He challenged students to be “change agents for Jesus, because the world is a mess.”
The four men who brought the paralytic to be healed saw a flaw with the status quo and chose to make a change. This kind of urgency can spread the spark for change to the world around us, he said.
Michael Johnson, director of alumni and church engagement, said having Crocker on campus was crucial for students.
“Our students ought to have access to the highest levels of leadership within the church,” he said.
In his message, Crocker told students that they could be a generation of change.

“What we heard today was someone in that generation in the highest leadership position, making it very clear that that is what he’s interested in, and that’s what he cares about. And I think that’s what young people want to hear,” he said.

This article originally appeared on the Micah Mandate website.

This entry was posted in Micah Mandate. Bookmark the permalink.